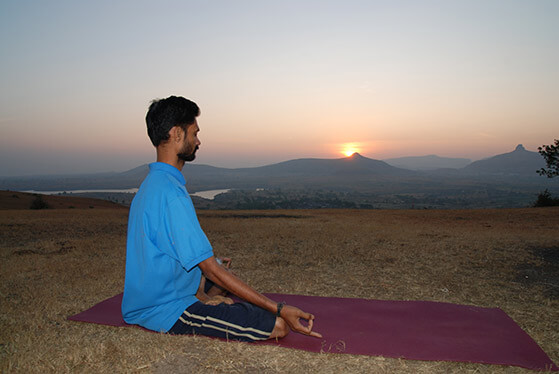 The process of kapalbhati is related to the breathing process, however it is not a type of pranayam. But, certain sadhakas think in this manner and study kapalbhati under the impression that they are studying a type of pranayam. However, process of cleaning the wind pipe is one of the shuddhikriyas. The word kapalbhati is made up of two words, kapal meaning skull ( here skull includes all the organs under the skull too ) and bhati means shining, illuminating. Due to the process, the organs under the skull mainly the brain and the small brain are influenced in a good manner. Hence the word is used in that way.

We have seen in the beginning that Kapalbhati is not a type of pranayam. It is process limited to Pooraka and Rechaka performed in a typical manner. Kumbhaka is not included here. Also, more importance is given to the Rechaka than Pooraka. In fact, Rechaka performed in a particular manner is the main process of Kapalbhati. Pooraka is just for the namesake.

Rechaka is more important in the process. While performing Rechaka, it is to be performed by way of effecting a push with the help of stomach muscles. The diaphragm and the muscles of the abdomen are to be moved violently and the air should be exhaled with the help of that movement. Hence, the rechaka is not prolonged and more air also is not exhaled. In day to day life, we exhale approximately 500 to 600 CC air per exhalation. During the Kapalbhati process, approximately 40 to 50 cc more air i.e. 550 to 650 cc air is expelled. This shows that exhaling more air is not expected during the process. When the rechaka is performed after such a push, when the muscles of the abdomen and the diaphragm are loosened, then automatically the air is inhaled. Only this minimal Pooraka is expected in the process. However, one Pooraka and one Rechaka do not constitute a cycle of Kapalbhati.

A cycle or rotation of Kapalbhati should be performed as follows :

In a cycle of Kapalbhati, swift Rechakas followed by Poorakas are expected. Both the actions are so swift that the duration cannot be definitely determined. However, after studying the process minutely, it can be said that Pooraka and Rechaka together about half second is the duration. (This period is further reduced by practice) Approximately three fourth time is required for Rechaka and one fourth for Pooraka. Of course, this is just to give an idea. It is not perfect and may not be strictly adhered to. It is not possible to adhere to it strictly. None of the ancient Sanskrit yoga describes how many cycles of Rechaka and Pooraka should be performed in a cycle of Kapalbhati. When the process can be performed neatly, the Pooraka and Rechaka should be performed for at least 21 times in a cycle of Kapalbhati. Such three cycles may be performed in one sitting. When this much is achieved, then the repetitions within a cycle can be increased. Each one should increase the repetitions as per his individual capacity and strength.

In the process of Kapalbhati prolonged Rechaka is not expected. Hence, more air is not inhaled into the lungs. Hence, it cannot be said that more oxygen is absorbed which improves blood circulation. Generally, a little more air than is taken in the normal gradual breathing ( approximately 500 to 600 CCS ) is inhaled and exhaled in Kapalbhati. ( say about 550 to 650 CC ) But more important in the process is the particular movement of the stomach muscles. However, this movement is the soul of the process. Performing Rechaka in this manner, does not involve movement of the cage of the chest. On the other hand, the muscles between the ribs of the cage are kept pulled while performing the complete cycle of Kapalbhati. In other types of breathing, these muscles remain pulled only while inhaling the breath. During Kapalbhati these muscles stay that way all through out the process and the ribs are kept pulled upward. This facilitates free movement of the muscles of the stomach as well as those of the diaphragm. It does not mean that the ribs do not move at all. A little movement is there, but it is so minute that it is not even noticed.

In the breathing process, generally the muscles of the diaphragm cannot be controlled. Generally they are controlled by involuntary nervous system. In the process of Kapalbhati, control is gained over these muscles and much movement is caused, that too very swift movement and more movement than is normally done. These muscles are important muscles in the breathing process and their efficiency is increased due to such movement.

The constant pushes exercise the muscles which are used for breathing, which increase their efficiency. Also, a certain pressure of air is created in the process which helps in removing he impurities in the breathing tube. The breathing tube from the alveoli is cleaned. The strong Rechaka and the minimal Pooraka help to push the impurities forward till they are thrown out of the body. While performing strong Rechaka, a draft of more pressure is created which affects the different vessels to improve their function. The effect of the push of the Rechaka is seen on the brain and the nervous system and their efficiency also increases.

Kundalini Power is a dormant power residing near the Muladhar Chakra near the lower abdomen. The pushes in the Kapalbhati awaken this power. That means the centre of effector nerve fibres over there is affected and this divine power starts climbing up the Sushumna Nadi. Of Course, all this requires detailed discussion and this discussion is beyond the purview of this syllabus. Hence, it is not discussed here. However, it may be remembered that this process of Kapalbhati helps awakening of kundalini power.

In this process of Kapalbhati, the carbon dioxide is thrown out of the body in large quantity and similarly in the same proportion, the oxygen is absorbed into the body. This increases the oxygen in the blood, hence the need for oxygen is lessened and the messages or the encouragement to breathing center is calmed down. The center becomes calm and reduces its instructions to the breathing organs. This facilitates control of the breathing organs. If there are urgent messages from the main center, then the organs follow those messages and it is not possible to control the movements of the organs. Hence, before studying pranayam, if Kapalbhati is practised for 2 / 3 times, then pranayam can be studied effectively.

It is said that in a cycle of Kapalbhati, maximum repetitions of Rechaka and Pooraka should be performed. For a common person, 120 repetitions per minute i.e. two per second is an ideal ratio. Sadhakas above the level of common person can go up to 200 repetitions. It is not advisable to increase the number beyond that.

References in the ancient texts

Meaning -
There are three types of Kapalbhati - Vatkrama, Vyutkrama and Sheetkram. By performing kapalbhati doshas of kapha are eliminated.
The next shloka describes Vatkram Kapalbhati.

Meaning -
The air should be inhaled with Ida Nadi ( left nostril ) and exhaled through Pingala Nadi ( right nostril ). Again the process should be performed in a reverse manner.

Meaning -
Pooraka and Rechaka should be performed rapidly, without performing Kumbhaka. This eliminates kapha doshas.

Then Vyutkrama and Sheetkrama Kapalbhatis are described. However, we will see them under the chapter Neti.

The process of Kapalbhati that we have studied so far is different from that stated in Gherandsamhita. Hathapradeepikakars have described Kapalbhati in a more correct manner.

Meaning -
When Pooraka and Rechaka are performed rapidly as in bellows of a blacksmith. It is known as Kapalbhati. The study of Kapalbhati reduces kapha doshas.

Both Gherandsamhita and Hathapradeepikakars agree that the practice of Kapalbhati eliminates kapha doshas. Hathapradeepikakar describes the process in detail. And the simile used by them is very apt in the sense that if one observes the movement of the bellows, the fan is pressed to release the air out with force and then loosened to let the air in with natural ease. Similarly, a forceful rechaka and natural pooraka with rapid movement is expected in Kapalbhati. Hence, the description by Hathapradeepikakar is more proper and clear than that given by Gherandsamhita and is more in vogue.